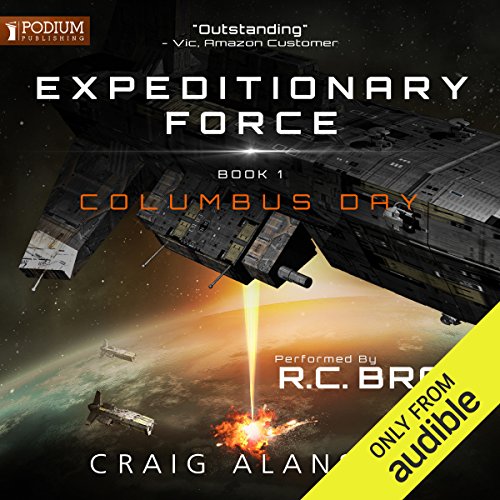 Columbus Day: Expeditionary Force, Book 1 Audiobook by Craig Alanson is a science fiction tale mostly filled with military actions and a good sense of humor along the entire story.

The novel begins on a Columbus Day in a distant future. That particular day the Ruhar hit the planet on what it was supposed to be a malicious attack. All of the sudden human beings were suddenly surrounded by these flying objects and the invasion starts. The advanced technology and aggressive culture of the Ruhar change the panorama and the nice quiet good old days were gone for good. One superior culture was taking over an inferior one, which was very propitious to happen precisely on Columbus Day. It was so accurate.

The next morning, the sky was covered again by spaceships, but on this occasion the saucers came from another outer space race: the Kristang. Joining forces with the UN, the Kristang attack the ships commanded by the Ruhar in any place of the Earth they were. And among all the men, soldier Joe Bishop saw him suddenly moving from the heat in Africa to the heat in the sky around the Earth. But he felt something was wrong in this war, something was completely wrong on the side humankind decided to stay.

Columbus Day: Expeditionary Force, Book 1 Audiobook by Craig Alanson narrates the story with “a muscular performance, a good range of energy for the action scenes and technical descriptions”. Also, the narration of the audiobook enlightens the humor content in the story and provides a diverse voice representation of every character presented in the material, from humans to aliens. And this is one of the best characteristics of the audiobook, the work of R.C. Bray in the voice characterization of every character from the main one, soldier Joe Bishop, to the many other characters appearing the entire story. His detailed rendition of the technical parts of the story is done with precision and with a briskly pace.

Furthermore, the humor along the story combines perfectly with the action scenes and the dialogues in more serious situations. The balance that the audiobook makes of its technical and humorous part is great, with the subtle handled of characters by the narrator.

The story would seem very predictable at the very beginning, but as it develops a little bit further surprises are the order of the day. Out of the blue, the plot starts to get full of unstoppable action, jokes, unbelievable situations, prison breaks, and a stolen spaceship.

Be aware of the language use if you are a person with sensitive ears, as well as if you are for something fuller of science, the audiobook has plenty of first and not so much of the second one. If you happen to be in any of these cases, then this material is not suitable for you.