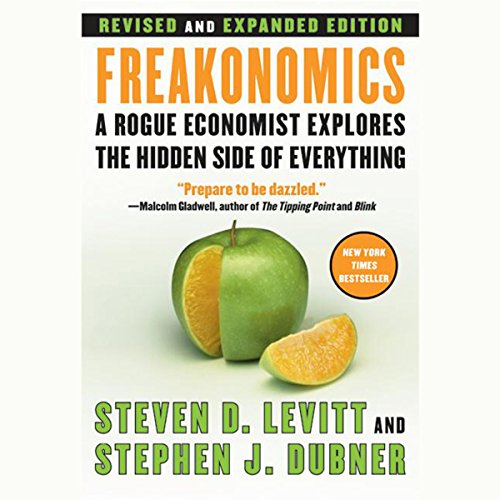 Freakonomics is an Audiobook by the journalist Stephen J. Dubner and the economist Steven Levitt in which they approach economics from an uncommon perspective, the principal of incentives. This audiobook shows some of their most interesting research.

Levitt and Dubner explain a lot of very interesting social phenomena through statistics. These phenomena are: cheating on standardized tests. In some cases where tests decide the job a teachers, they tend to cheat in order to make themselves look better.

One of the most culturally relevant points that Freakonomics elicit is the fact that the decreasing criminality rate in the 1990s can be the result of the Supreme Court case, Roe v. Wade, that legalized abortion; claiming that a lower number of unwanted children translates into fewer criminals.

They also spend two chapters where they mainly concentrate on socioeconomic issues that involve class, biology and race. They apply years in education statistics to conclude that students who have been encouraged to succeed in their family will be successful regardless of the school they attend to.

In Freakonomics, Levitt and Dubner have applied numerous years of economy and statistics to come up with conclusions that even the most prepared sociologies haven’t been able to. This amazing audiobook is full of very interesting facts and the critic has found it a surprisingly fun. Most of the media claim to dislike books about statistics and economy. However, this audiobook seems to have caught everybody’s attention because of the way how the information is presented.

They examine the cause of things by analyzing a great amount of numbers which makes it one of the very few economy books to receive so much praise. They claim to take statistics and economy to its most primal form in order to simply understand how people get what they want, which is a very important question asked by most societies.

Levitt and Dubner explained that, even though many experts claimed that crimes will raise during the years 1995 to 2005, the U.S. was actually surprised when instead of increasing from 15 to 100 %, how it was foreseen, it actually decreased.

Freakonomics analyzed this fact and attributes this phenomenon to the Roe v. Wade Supreme Court case that legalized abortion back in 1970. Apparently, abortion permitted the regulation of the incredible number of unwanted children that would eventually become criminals during their teenagehood and early adulthood, especially the ones that come from a poor family with criminal records and violent background.

Wizard's First Rule: Sword of Truth, Book 1
The Wright Brothers
Face to Face with God: The Ultimate Quest to Experience His Presence
Developing the Leader Within You 2.0
Jivan Jyoti
NKJV Voice Only Audio Bible
X