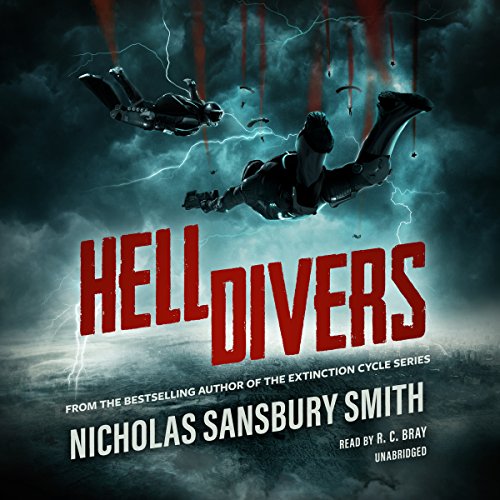 Hell Divers is the series opener of the Hell Divers Series by Nicholas Sansbury Smith. It is set in an overwhelming post-apocalyptic world. There are two giant airships orbiting around an Earth full of radioactivity. The Hell Divers are introduced when they go down to the Earth to scavenge and to send back to the ship what they find. The increasingly necessary dives become more dangerous when the seasoned Hell Diver Xavier “X” Rodriguez finds a new breed of monster on the surface of the Earth, especially when the second ship is critically damaged in a critical storm.

This is an excellent military space science-fiction novel that has been appreciated by the critic. This incredible novel is specially regarded by videogame players or gamers who find the setting incredibly interesting and full of surprises.

Hell Divers by Nicholas Sansbury Smith is an audiobook that opens the path for the Hell Divers series. The story presents an Earth that has been poisoned by World War III over two centuries ago. In this post-apocalyptic world the last survivors of the human race are struggling for survival while living on two massive spaceships that are orbiting around the poisoned Earth. The two enormous spaceships circle the earth looking for a place to live.

Most of the ships are long destroyed since they were very old and they fell back to Earth. The two remaining spaceships have been able to survive thanks to the Hell Divers. The Hell Divers are compound by men and women that go down to the surface of Planet Earth skydiving and putting their lives at risk in order to look for spaceship parts that they so desperately need.

One of the spaceships is damaged in an electrical storm and in consequence, a Hell Diver team is deployed to a very dangerous and hostile zone called Hades.

Things get even more dangerous when they discover a new kind of creatures far more dangerous than the ones they found in previous dives. The fragile future of the Humanity seems to be at risk.