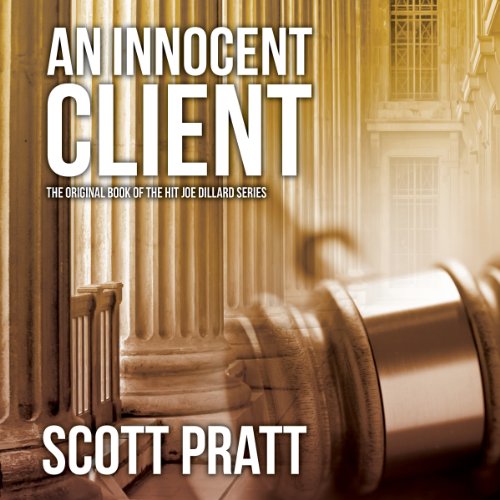 An Innocent Client by Scott Pratt audiobook is set in Tennessee and it centers on Joe Dillard, a criminal defense lawyer that is about to quit his job because he needs to find a balance between work and his conscience, which is very difficult if he always has to defend guilty criminals.

However, his plans of retirement will be paused when a mysterious girl approaches him and asks him to defend her I court, after a preacher was found brutally murdered in a motel room and one of her employees is accused of the crime.

Dillard cannot lose the opportunity of defending someone who might actually be innocent, so he fully commits and starts working in the case despite his messy personal life, with a drug-addicted sister and a mother that suffers from Alzheimer’s.

“Smart and sophisticated, with a plot twist that will leave you shaking your head in wonder, ‘An Innocent Client’ -- the first in the acclaimed Joe Dillard series-- will also leave you wanting more.”

An Innocent Client by Scott Pratt audiobook is a legal thriller which is the first one in the Joe Dillard’s series and that has all the ingredients that will leave you wanting to read more.

Everything starts with the death of a well-known preacher that was found murdered in a motel room. Apparently, the preacher had visited a “gentlemen’s club” the night before, and a young girl that works there is accused of the crime. Here is where Joe Dillard meets the owner of the “club”, who asks him to defend the girl who is being accused.

Joe Dillard is a criminal defense lawyer that is tired of defending criminals and it is planning his retirement along with his wife so he can find a balance in his life and some moral peace. Also, he has to deal with his family, because his sister is addicted to drugs and was just released from prison and his mother is suffering from Alzheimer’s. However, he postpones his plans of retiring so he can finally defend a person that seems to be innocent.

The novel has a good rhythm and feels real. We get an up-close view of how corrupted and hypocritical the judicial system is and how lawyers and judges manipulate the circumstances in their favor.

The characters are well-written and they have a good development. The relationships between them are credible and Dillard is a nice guy that anyone could like. He is very good at what he does and that is evident throughout the novel. The accuracy of the law aspects of the novel are definitely because of the degrees Scort Pratt holds in both English and law.

The story has a good number of plotwists and it is a good option if we want to read something captivating that is easy to read and that we will be able to finish in a short period of time. We recommended it to all of the fans of thriller novels.

Go download An Innocent Client to discover who the perpetrator of the murder was!


Is An Innocent Client audiobook worth it?

As a legal thriller, An Innocent Client audiobook is totally worth it. You should definitely check it out if you have the opportunity.

Are legal aspects of An Innocent Client accurate?

Taking into consideration that the author has a law degree, the answer is yes, everything is portrayed accurately and feels real.

To whom would you recommend An Innocent Client?

If you are a fan of mystery and legal thrillers or if you enjoy certain authors of this genre, like John Grisham, you should definitely give this audiobook a try.

Is the mystery of An Innocent Client credible?

Even though sometimes the resolution of crimes in certain thriller novels is hardly credible, this is not the case of An Innocent Client. If you pay attention to what is happening, you can even anticipate some of the events.