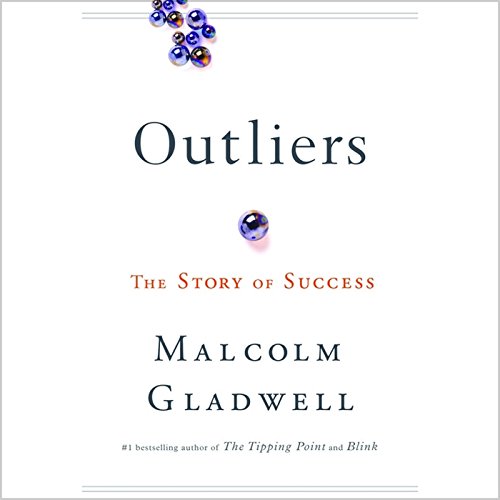 Outliers: The Story of Success by Malcolm Gladwell

The readers can download Outliers: The Story of Success Audiobook for free via Audible Free Trial.

Outliers: The Story of Success by Malcolm Gladwell a non-fiction book focusing on factors which contribute to high level of success was first published in 2008. The author describes an outlier as a person who is so far ahead in his or her field that they define their own success. Gladwell points out that success is not only due to individual merit and dedication rather it depends on many other factors. Achievers need a great deal of luck and also the cultural legacy which they inherit from the society they were born and lived in.

Gladwell opens the book with the observation that high proportion of the Canadian hockey players are born in the earlier months of the calendar year. The youth hockey leagues determine eligibility for the calendar year which means the children born earlier in the year will be larger and better prepared to succeed. He also gives examples of the musical ensemble the Beatles and Microsoft’s founder Bill Gates and the reasons for their enormous success. Gladwell reasons that family culture, friendship and one’s society has a great role to play in any individual’s success.

Gladwell also emphasizes the “10,000-hour” rule in his book, based on a study by Anders Ericsson. The author reasons that greatness requires considerable amount of time practicing one’s trade. The Beatles played more than 1200 times in different cities between 1960 to 1964, thereby amassing a playing time of more than 10,000 hours which is a prerequisite for greatness. Similarly, Bill Gates spent more than 10,000 hours of programming when he got access to the high school computer in 1968, aged 13 years.

Outliers: The Story of Success by Malcolm Gladwell received positive from the critics and debuted at number one on the New York Times Bestseller list. Some readers may find the cultural aspects for success as reasoned by author a bit naïve. The book though provides interesting insights into what leads to success. The writing of the author is clear and concise and the readers will be able to relate to the narrative put forward by the author. Gladwell puts the various stories and data coherently to make his point and does a good job of it.