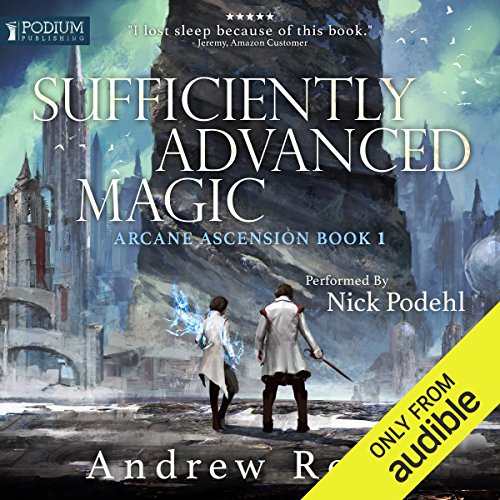 Sufficiently Advanced Magic: Arcane Ascension, Book 1 Audiobook by Andrew Rowe is fantasy work in a universe where magic and people who wants to develop their magic skills should go to a test, a dangerous one indeed.

In this world, people take a test done in the Serpent Spire; this is an enormous tower with ever-shifting rooms, traps, and many monsters. The main idea to go through the tower is to obtain an attunement which granted magical powers to the bearer if he or she survives the trials. Stories are told that those who get to the top of the tower will be given a blessing by the Spire’s goddess. It is good to insist that this would be obtained if you survived your time at the tower. Five years ago, Corin Cedence’s brother attempted to take the test, but he never returned home.

So now it Corin’s chance to go through the tower and prove his worthy to get the attunement and he is also interested in finding out his brother within the walls of the tower, if he is still alive in there. He pretends to get to the top of the tower and talk to the goddess, but the dangers ahead are going to require for Corin to be ready for them and he will need all the help he can get from his training, some allies, and a lot of inventiveness.

The obtaining of the attunement guarantees your entrance to a school to improve the magic gift given and, after a certain time, it will give the chance to return to the tower to earn more attunements.

But in the case of Corin, the attunements are just one part of the quest.

Sufficiently Advanced Magic: Arcane Ascension, Book 1 Audiobook by Andrew Rowe is the first entrance in the series and it has been well received by fantasy followers in general. The material originally entered the Self-Published Fantasy Blog-Off (SPBO) and got into the second place in November 2017. The novel got the honor to be given the Stabby Award for Best Self-Published Book in the 2017.

Nick Podehl gives the right tone to the story and provides different voices to each character, makes you feel that you were going through the same situation of the audiobook’s hero during the 21 hours and 58 minutes that takes listening the whole material. Besides the long time, the audiobook does not bore and it is really enjoyable especially for those people very fond of stories involving magic pack with action, character development and a good and attractive story to follow.

According to the author, this is a material intended for those who love a traditional fantasy novel with certain touches of RPG games, but not falling directly in the category LitRPG. So if you enjoy these sorts of games and literature, this audiobook will provide you a great time at listening.

Red Sparrow: A Novel
Postwar: A History of Europe Since 1945
The Rise and Fall of the Third Reich: A History of Nazi Germany
Abundance Now: Amplify Your Life & Achieve Prosperity Today
Bound by Flames: Night Prince, Book 3
The Glass Castle
X