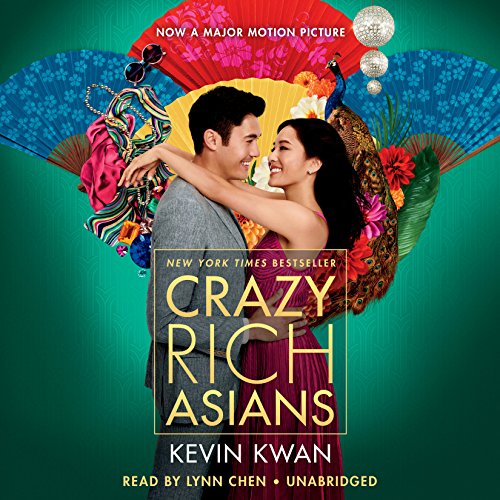 Crazy Rich Asians Audiobook by Kevin Kwan is the debut novel of Kevin Kwan narrating the misadventures of a American-born Asian woman who has agreed to visit her boyfriend’s family in Singapore. What Rachel Chu does not suspect is that her fiancé Nicholas Young is not the member of a humble family back in Asia as she has imagined he was; but he belongs to one of the healthiest families in Singapore with a home that look like a palace. Not also she has to ride in private planes to move around the country, she has to deal with the fact that she is engaged with the most desirable bachelor in all Singapore.

There Rachel is going to deal with details that she didn´t have to in New York. She has to be involved in the way society wealthiest people enjoy their lives, to be part of the gossips around the rich and the news they represent to certain magazines. Furthermore, her time there gets annoying since she finds opposition from her boyfriend´s parents, especially Nick’s mother, about their engagement.

Also, the story offers a picture of the different styles of life within mainland Chinese people and Overseas Chinese descendants, and the meaning of being young, in love, and completely crazy rich.

Crazy Rich Asians Audiobook by Kevin Kwan is a funny and outrageous look of what Asian people with money do with their lives and the way of tradition and richness play in a society marked by a big and rich culture and the clash it means when a woman form the same race but form different country.

The printed edition hit the market in 2013 and the audiobook came at the very same time of that edition. The novel has been real successful among Asian people and a movie is coming to theaters this August 2018.The story is part of a trilogy whose final chapter was released last May under the title of “Rich People Problems” with the same success as the first and second part.

The book series have proved successful among many people in the world, especially with American-born Chinese, but for Mainland Chinese this material is full of stereotypes and depicts Chinese people with all the characteristics white people has given them for years. Although criticism is higher day after day, it is undeniable that Kevin Kwan has found a gold mine and he’s taking advantage of that with the endorsement of a great deal of fans.

I grew up surrounded by insane wealth.

Not, “my uncle/friend is a public servant” or “they own a few bungalows”

But, “we’re having dinner with the royal family next month and we just sold that company for a mid 9 digit sum because we didn’t want to bother with it anymore”

[h3]In the book Crazy Rich Asians by Kevin Kwan, why does it seem that the characters think about Mainland Chinese in a certain way? [/h3]

A wildly unpopular book in China I guess, took me quite some time to find some relevant info about it. And after reading some reviews (albeit hard to find), I don’t think I will ever read this kind of non-educative, non-enlightened book ever, for this kind of book is already a has-been in China.

As for why a character in a certain book wrote by a certain someone thinks in that certain way, look no further than the author and his/her perception of the world.

A Wrinkle in Time
Barking up the Wrong Tree Audiobook by Eric Barker [Free Download]
The Crown's Game
Talk Like TED: The 9 Public Speaking Secrets of the World's Top Minds
The Color of Water
Solve for Happy: Engineer Your Path to Joy
X