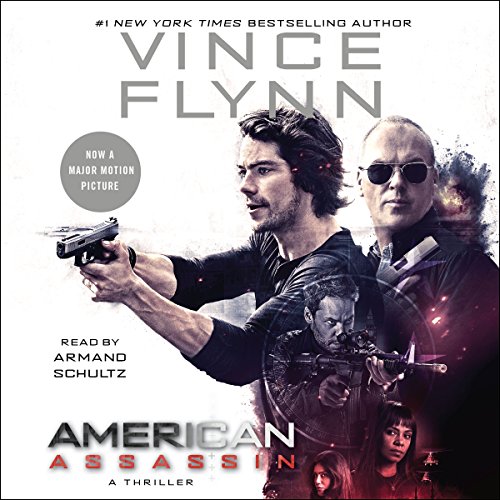 The readers can download American Assassin Audiobook for free via Audible Free Trial.

Amercian Assasin by Vince Flynn is a prequel to the life of Mitch Rapp detailing out his life before joining the CIA and his special operatives training. It tries to give the readers a prelude to Mitch Rapp’s life as a CIA special operative. Rapp was a star lacrosse player at Syracuse University, New York. He was a gifted athlete. He was waiting for his girlfriend to return home during the holidays. He discovered about the bombing of Pan Am flight over Lockerbie, Scotland, in which his girlfriend was killed. Rapp becomes grief-stricken and vows to avenge the loss of his girlfriend and settle scores with the terrorists.

CIA agent Irene Kennedy comes to know about Rapp and keeps a close watch on him. She approaches Rapp with the objective of offering him to join special operatives forces in CIA, specializing in counter-terrorism measures. Rapp accepts the offer and is taken to Lake Anna, Virginia training facility run by Stan Hurley. Initially, Hurley is convinced that Rapp will not be able to make it through the training due to his lack of military training and authority problems. He pushes Rapp harder than other trainees, but Rapp does not give in and shows his indefatigable focus towards succeeding and taking revenge from the terrorists. Rapp proves himself to be a cut above the rest.

A terrorist group led by Assef Sayyed has taken two American spies as a hostage in Beirut, Lebanon. The hostages are being tortured for getting some information from them. Rapp is sent on the mission to neutralize the terrorists and ensure the spies return home safely.

American Assasin by Vince Flynn takes the readers through the life journey of Mitch Rapp. The different facets of his life-like the gifted athlete, the toughened man who vows to avenge the killing of his girlfriend to one of the most elite counter-terrorism special operatives of the CIA- have been cohesively plotted. The audiobook maintains a fine balance between action and elucidation and does not get caught up in political events and explaining the same. The characters have fleshed and detailed out which enables the readers to develop a bonding and deeper connect with them. Mitch Rapp emerges as a likable character.

The author also makes a clear differentiation between the protagonist and antagonist in the audiobook. The enemy has shifted from America’s old nemesis - Russia-to the new opponent - Islamic terrorism. The audiobook is a lucid and gripping read, which keeps the readers interested and hooked to the last page.