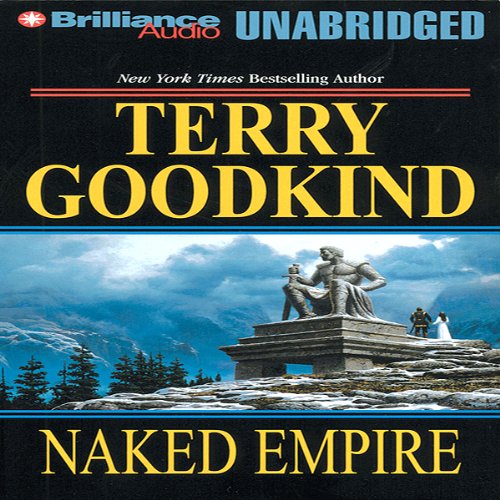 NAKED EMPIRE. It begins . . . "You knew they were there, didn't you?" Kahlan asked in a hushed tone as she leaned closer. Against the darkening sky, she could just make out the shapes of three black-tipped races taking to wing, beginning their nightly hunt. That was why he'd stopped. That was what he'd been watching as the rest of them waited in uneasy silence. "Yes," Richard said. He gestured over his shoulder without turning to look. "There are two more, back there." Kahlan briefly scanned the dark jumble of rock, but she didn't see any others. Lightly grasping the silver pommel with two fingers, Richard lifted his sword a few inches, checking that it was clear in its scabbard. A last fleeting glimmer of amber light played across his golden cape as he let the sword drop back, in place. In the gathering gloom of dusk, his familiar tall, powerful contour seemed as if it were no more than an apparition made of shadows. Just then, two more of the huge birds shot by right overhead. One, wings stretched wide, let out a piercing scream as it banked into a tight gliding turn, circling, once in assessment of the five people below before stroking its powerful wings to catch its departing comrades in their swift journey west. This night they would find ample food.

What Is Art?
The Green Mile
World of Warcraft: Jaina Proudmoore: Tides of War
Zane: An Alluring Indulgence Novel, Book 2
Pharaoh
Don't Bullsh*t Yourself!: Crush the Excuses That are Holding You Back
X