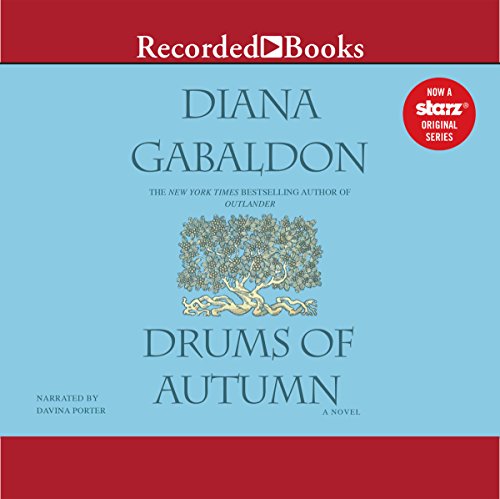 Drums of Autumn by Diana Gabaldon

The readers can download Drums of Autumn Audiobook for free via Audible Free Trial.

Drums of Autumn Audiobook by Diana Gabaldon is the fourth book in the Outlander series. The novel picks up where the previous book Voyager ended. In the Voyager ended with Jamie and Claire shipwrecked on the Georgia coastline. In the Drums of Autumn, they make their way toward North Carolina and move to a plantation owned by Jamie’s aunt Jocasta.

Jocasta proposes to make Jamie her heir and asks him to run her affairs. However, Jamie and Claire do not agree and they move to the mountains of North Carolina. Jamie and Ian start building a house and farm and a clinic for Claire. Jamie and Claire start settling into a routine and normal life and start enjoying a peaceful life together.

Meanwhile, Claire’s daughter Brianna is still in the 20th century. Brianna enters into a relationship with the historian Roger Wakefield. Their relationship is more like an on and off relationship, but both of them love each other. Brianna also wants to find out about her father whom she has never met. Roger comes across a newspaper clipping of Jamie and Claire’s death in a fire accident. He hides this from Brianna as he fears she may travel back in time and he will lose her.

Brianna finds the newspaper clippings and due to her intense desire to know Jamie Fraser and to save her parents, she travels back in time through the stone like her mother. When Roger comes to knows of this, he also travels back in time to join Brianna in her quest to save her parents. The remainder of the story is about what unfolds when Brianna meets their parents and Roger joins them there too.

Drums of Autumn Audiobook by Diana Gabaldon carries the story of the Outlander series forward. The story moves forward swiftly and there is not a lot of recap and going back to recall the storyline of the earlier novels of the series. The author has detailed the drama in the plot cleverly.

The story has been told from different characters viewpoints which makes it more interesting and helps the readers get insights into each character in a better manner. The romance between Jamie and Claire has been beautifully depicted in this novel like the earlier novels of the series. Overall, the novel is an enjoyable read and the readers of the Outlander series will definitely like it.

My Side of the Mountain
How to Talk to Anyone: 92 Little Tricks for Big Success in Relationships
Bag of Bones
Escaping Peril: Wings of Fire, Book 8
Menopause Confidential: A Doctor Reveals the Secrets to Thriving Through Midlife
The Forest of Hands and Teeth
X